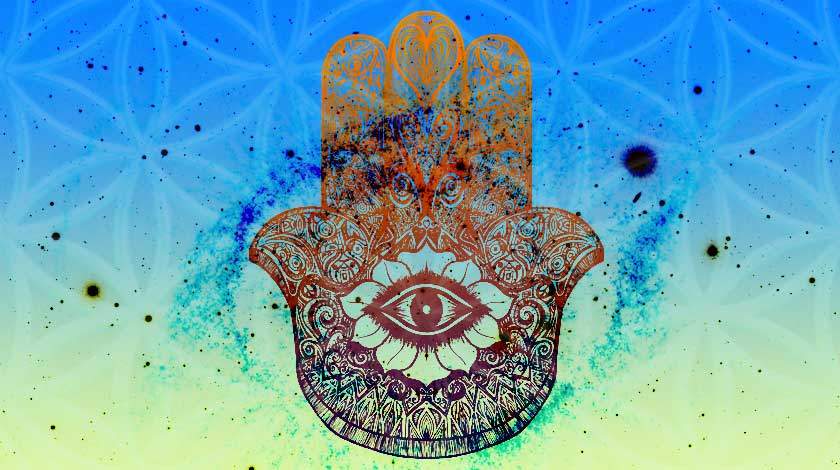 Have you ever heard of the Hamsa ?  Its symbol is of a hand with an eye in the palm.

This image is shared by many middle eastern countries, and is part of jewish, arab, and muslim religions.

No one really knows its exact origins but it has survived the test of time.

When you break down the word itself we start to see exactly what it is.

In egypt, 2 energies existed before creation. Hu and Sa.

Ra who is the manifestation of Hu and Sa was divided into 14 Ka, (14 aspects of universal forces) Also remember the story of osiris was cut into 14 pieces.

Hu and Sa was chanted as a mantra HumSa, because they say that the vibration of this mantra is the universal sound of the human breathing in and out.

So the symbol of the HAMSA makes perfect sense.

The 14 aspects of the universal forces, the divine will and consciousness, it reflected in our hands !

This is the bases for all the Mudra meditations found all of the world.

By holding mudras, or even hold your fingers / pads of fingers, you are connected and going into resonance with your divine will and consciousness.

The pyramid were even is based on this sacred knowledge.

When this ratio is divided, you get the second series of the fibonacci series and you get Half of pi.

If you take the pyramid and give it a scale of 1, then you can see that the kings chamber is at exactly 0.44 on the 0.88 axis. 440 hertz is perfect pitch of A which all instruments are tuned too.

These ratios of pi and the fibonacci series not only are found in the pyramid, but literally found everywhere in the natural world.

Leonardo Devinci also used these ratios to create the correct proportions of the human body in his famous work the Vitruvius man.

The body is literally a reflection and transmitter of universal laws and energies.